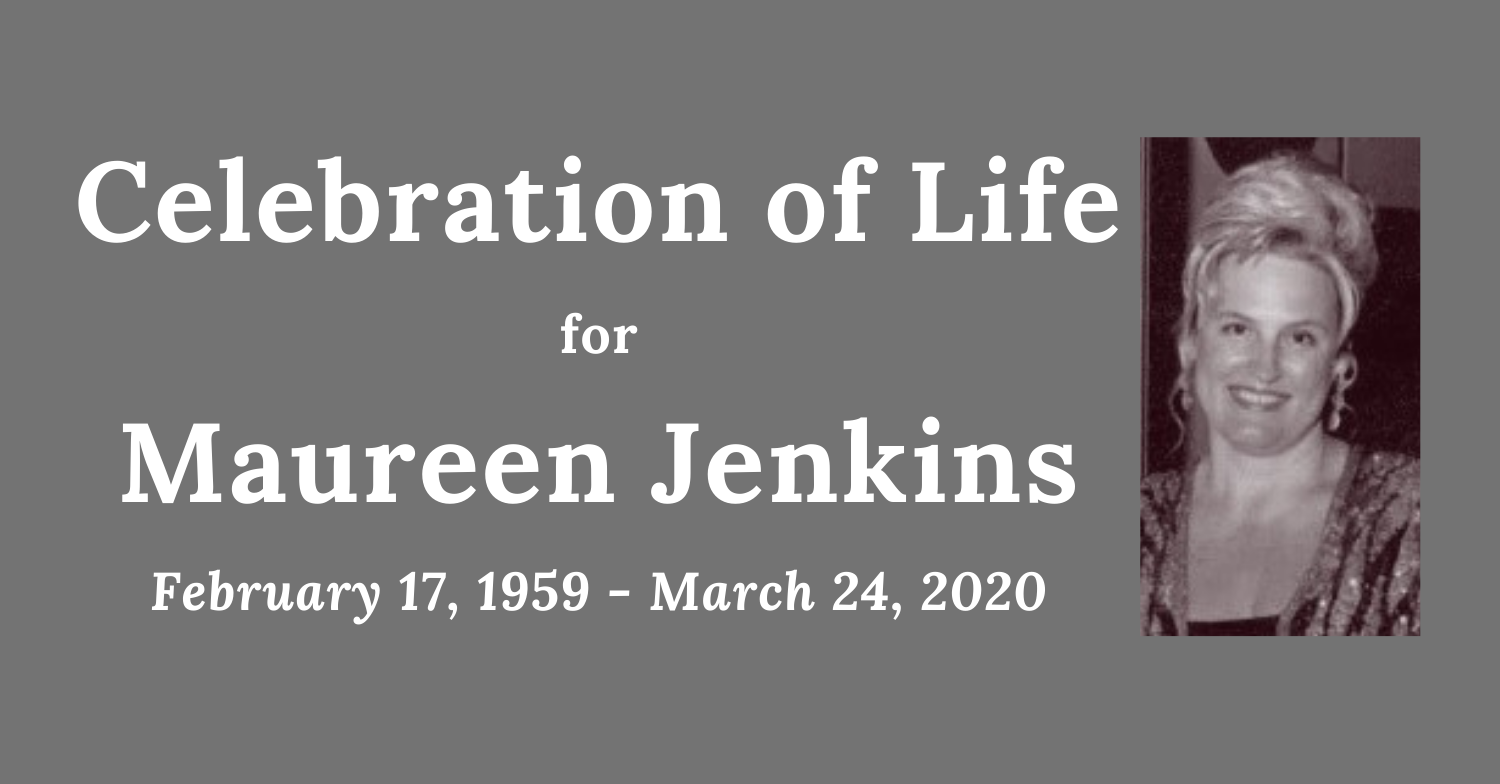 Save to your Calendar

A service for the Celebration of Life for Maureen Jenkins will be held at 2:00PM on Thursday, September 24 at St. Paul's Anglican Church. Due to Covid-19 gathering restrictions (limiting in-person attendance), the service will be live streamed on the St. Paul's YouTube channel (found HERE). The live stream will be accessible starting a few minutes prior to 2:00PM on September 24 and will remain available on YouTube following the service.

The service leaflet is available for download (at bottom of this page) in both PDF and Word format. Maureen's obituary can be found below.

The Celebration of Life for the late Maureen Jenkins will be live-streamed at 2:00PM on Thursday, September 24, 2020. The service may be accessed using the above link. Due to the pandemic, no reception will be held at this time.

Maureen Jenkins, 61, passed away Tuesday, March 24, 2020, after a lengthy battle with illness. She is survived by her husband, David Jenkins of Edmonton, her mother, Dorothy Devaney, Ottawa, her son, Jason Jenkins (Kris), Edmonton, her brother Michael Devaney (Giselle), Ottawa, her sister, Karen Morrison (Scott), Ottawa, her nephew Curtis Morrison (Sheena), Bainbridge, ON, and her nephew Trevor Morrison, Ottawa. Maureen's remains have been cremated. In lieu of flowers, please make a donation to the Alzheimer's Disease charity of your choice. The family gives heartfelt thanks to all the caregivers who looked after Maureen over the past nine years, including Dr. Oye Soyege, Diane Ries, owner of DLR care, Danielle Martin, Anna Maillet and Kathleen Jones - and the wonderful staff at Devonshire Care Centre, including Ruth Jackson, R.N., Ferdilina Ramos, Alma Magday, Anita D'mello and many more. Maureen grew up in Ottawa and has also lived in Phoenix, Toronto, Calgary and Edmonton with her husband David. She was educated at Algonquin College in Ottawa. In 1994, Maureen and her husband David founded Cruise Vacations Inc., which quickly grew to become one of the world's largest cruise specialty travel agencies, located in Edmonton. Maureen was regarded as one of the leading experts in the cruising industry. She earned many awards, including the prestigious "Centurion" award from Holland America Line, for 26 consecutive years. The Centurion award goes to the top 100 agencies in the world, as measured by annual volume of bookings with Holland America. Maureen and David have been on more than 220 cruises, to all the greatest destinations in the world.